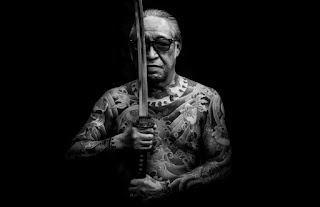 I have always wanted to go to Japan and now there is another reason why - tattoos. Japan is becoming increasingly popular with westerner’s who are keen to get tattoos from the Japanese artists who are, in turn, keeping their artform alive through their foreign customers. This article aims to give you a few pointers about the places to visit whilst on a tattoo holiday because of the artists working out of there and some information surrounding the subject. I’m excited about the prospect of visiting Japan, and that’s what it should feel like: a chance to discover something new; a new culture, history and artform for yourself. There is also, I found, an edgy feeling to this type of pilgrimage too; tattoo culture, still has a fringe feel to it that’s exciting especially in Japan. Join me as we look at some people, places and things that may interest you about your, Japanese tattoo trip.

Hariyoshi 3 is top of this list for obvious reasons (not that there is an order of preference here). If you’re not familiar with this artist’s work, you will be by the time you search “Japanese tattoo art” on the internet; he is known as the ambassador of Japanese traditional Irezumi tattooing. Yokoharma has a range of hotels from reasonably priced traditional hotels like the Hotel New Grand to luxury hotels like the ultra-modern Kahala Hotel and Resort, depending on your preference, the latter will set you back £418 a night.

Bunshin Museum is a place where you can soak up some of the rich heritage that preceded the current artists who are zapping their ink into the people who seek it. Curated by Hariyoshi 3 himself this museum is full of weird and wonderful stuff and scores as a must see for any tattoo enthusiast hoping to get some inspiration for their ink ideas. This museum, however, is also interesting just for the observers of the history behind this ancient form of art.

Formally a master samurai-sword smith, Hariyasu is now known as one of the most highly regarded tattooists of Irezumi style in Japan today. This multi-award-winning artist is known for tattooing foreigners. Hariyasu’s studio is based in Taito City, Tokyo. Taito City is Tokyo’s smallest ward, but what it lacks in size it more than makes up for in richness, history and culture. The area consists of parks, temples and museums like the National Museum of Western Art.

This award-winning artist has a 2-3 year waiting list for a good reason. This artist is gaining a rock star status in the tattoo world.

Kanagawa is a coastal region just south of Tokyo with Yokoharma to the east. Mt Fuji is nearby and can be seen from certain locations. There is also a large Chinatown with food stalls and restaurants and Ōsanbashi Pier with waterside paths and shops, so whilst staying here there is lots to see and do.

Honma is a young up-and-coming tattoo artist who is originally from Korea. Tattooing out of Needling Ink in Sakai, Osaka. With his original modern take on an old idea; it may be worth getting in quick before he becomes a household name with long waiting times.

Osaka means, “large hill” or “large slope”, and was traditionally known as Japans economic hub. Famous landmarks include: Shitenno-ji (the oldest Buddhist Temple in Japan), Osaka Castle and Sumiyoshi Grand Shrine; all three of which are stand-alone spectacles. Considered the soul of Japan this destination is popular for good food, with its neon lit Nipponbashi area.

According to Choshu’s own website “In his early twenties, Choshu-Horikazu took an interest in the art of traditional Japanese tattooing. Ever since then, Horikazu devoted his life to pursue his dreams and practiced every day in order to achieve a craftsmanship to deliver to the world.”

Hikari means “brilliance” or “light”. This little place has an abundance of things to do whilst there. Making use of it position on the water, there is Nijiga Beach, Itsukushima Shrine and many more desirable attractions to fill the times between the tattooing and holidaying.

Honey Tattoo Studio in Ikebukuro is home to another great of the tattoo world - Horimitsu. People frequently fly to Japan to be tattooed by Horimitsu, who himself claims “interest from overseas is a lifeline for the ancient form”.

Ikebukuro is the entertainment and commercial district in Toshima, with huge department stores on offer, including Sunshine City a popular mall which includes cat cafes and an aquarium.

Tattoos are generally banned in: pools, onsesns (bath houses), gyms and ryokans (Japanese inns). Travellers may want to research cultural differences connected to tattoos in Japan, compared to Western cultures for example: whilst travelling on public transport you may want to consider covering your tattoos as some locals can find them offensive. This is because tattoos are generally seen as hostoriaclly having connection to organised crime.

If you are wanting to submerge yourself into some rest and relaxation whilst on holiday but have tattoos here are some onsens (hot spings) that allow tattooed clientele:

Yamato No Yu in Chiba.

When you get to Japan you might be surprised by some difference to the Western model of tattoo shops. The open studios are much the same, the closed ones are likely to be in the artists private residence, even in their bedroom or living room, so it’s a good idea to check which it will be when you book so there are no surprises.