As the red and gold gilded curtains close, to a cacophony of applause, it’s the end of Tchaikovsky’s Eugene Onegin at Minsk Opera House and the end of my visit here in Belarus.  We walk out of this beautiful building to a nights icy, cool and clear sky with full moon and vivid streetlights to guide our way into the city for a last meal in one of Minsk’s latest restaurants, Thai Garden. Restaurants and cafes, as we know them in the West, have only been here within the last seven years and this brings a specialness, and a newness to each cafes concept, it also brings an edginess that is refreshing and exciting. It’s a serious place with serious issues going on but as a traveller it is broadening my mind and opening it to similarities in the differences and connections, we all share.

There are limited flights currently flying to Belarus from the UK, you can either fly via Istanbul or via Moscow. The first thing on my arrival, that draws my attention, is the striking architecture. My guide has brought me to October Square which is the central main square of Minsk. The buildings here are old soviet giants the only thing to rival them is the space in-between, popular in the soviet era for parades. The buildings surrounding me include the residence of the president, the Palace of the Republic and the Museum of the Great Patriotic War. On attempting to take a photo of a building, that was spectacularly lit up with lights and had eerie recorded nature sounds coming from the grounds, my guide quickly explained that I “should not photograph this building as it was the President’s residence.” This I take very seriously, and we moved into the underground metro and continued to the Museum that we had come to see.

The art, history and culture here is both fascinating and contrasting. You have a selection of attractive buildings that hold exhibitions. We are at the Belarusian State Museum of the Great Patriotic War, which has been moved to a relatively new building that is magnificent with giant phallus monument as we approach. 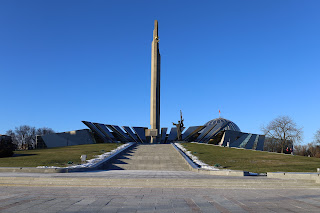 Seeing the history here gives you a different perspective and allows a compassion to grow for the collective struggle that people must endure, then and now.

The next morning, we walk along the main street that runs from the east of Minsk to the centre. This, street my guide tells me, is called Independence Avenue and has previously been named Stalin Ave and Lenin Ave. My imagination projects visions to the past of what this space has seen. I’m lost in thought and storyline, taking a photo of a beautiful building lit up by the sun on this crisp cool afternoon when my guide again quietly says “please don’t take photos of this building it’s the KGB”. The KGB’s building is but one of the beautiful buildings on this road, so I swallow my fear and my pride and move on, the rush of excitement adds to the enjoyment of the scene. There is also some sadness as I then realise that this is a buzz for me but a reality for those that live here, freedom is precious.

One observation I make whilst walking down this long road is there is absolutely no homeless, drunk or in fact any lawlessness that I’m used to in the UK. Things here are efficient and clean, my guide explains to me that “if your unemployed here the state fines you and increases all your bills.”

This city can be a remarkable break from the West, if you can get here. As I take a taxi back to the airport, I pass what must be a 2-mile convoy of army vehicles lit up by the full moon, as the curtain closes on this surreal scene alike the opera I have just come from. There is a tension here that is palpable and with growing news of Belarus joining Russia regarding the trouble on the Ukraine border, I hope I can come back soon.

·      Entry to the Belarusian State Museum of the Great Patriotic War is 9 Belarusian Rubbles which is Roughly 3 Pounds Sterling.

·      You’ll require health insurance that customs will check before letting you into Belarus.

·      You will be required to register your stay with the state giving them details of your stay, you can stay for a max of 30 days as a UK resident.